I love my husband!

No, he didn't do something out-of-the-ordinary that brought me to that realization. It was a gift from last night's Summer Solstice Celebration. A group of like-minded individuals met behind Sarasota's Unity Church, which has a wonderful labyrinth laid out in a wooded area. The event was filled with sacred chants and a variety of ceremonial empowerments, led by my friends, local spiritual guides Zan Benham and Jo Mooy.

After darkness fell, and the event ended, people left. I found myself walking the labyrinth itself, which hadn't actually been part of the ceremony. I love walking a labyrinth and use it sometimes in my own workshops. We once led an Intimacy Retreat at Relax-4-Life, a labyrinth center near Chicago. (Check out their hand-held labyrinths!) There's something magical and meaningful that occurs as you walk round and round to the center, and then out again.

As I walked, I felt at ease and in alignment with my life path. Yet a question arose, "What is my real truth?" Without seeking an answer, I simply walked with the question. Upon reaching the sacred center, I heard this powerful statement emerge from within me: "I love my husband!"

I wasn't expecting that at all! But it was delicious, and definitely true, and as I followed the path back out of the labryrinth, I held that truth as a joyous feeling.

Imagine my surprise, as I existed the labyrinth, to actually see my husband. He had decided to come to the event rather late and had just arrived, after everyone else was gone - except me.

This was a Summer Solstice I will always remember.
on 6/22/2009 No comments: Links to this post

One thing leads to another. Coincidences? Fate? Karma? All I know for sure is that I never know in advance what will happen when I move forward. Moving forward can simply mean getting up, getting dressed and going for a walk. Attending a gathering - social or professional. Leaving a comment on a blog that interests me. Sure, sometimes nothing happens. But more often than not, one thing leads to another, and usually in most unexpected ways.

Or maybe I just forget all the days when "nothing" happens. By the time "nothing" has happened, I'm already moving forward in another way!

I started this post a few days ago and probably had something significant to share about connections, but alas, I have moved on.

So what's exciting to me today is that it is Night Blooming Cereus time! Every year, around summer solstice, this cactus-vine plant that wraps around our palm trees puts out flowers. Just this time of year. For a few days, there are blooms. But here's the catch - ONLY at NIGHT! And what blooms they are. You have to wonder, why at night, and, why during the SHORTEST nights of the year?

There are some photos below. The real flower is even more profound. In the bottom photo, see the little fuzzy balls? They'll get more and more erect until finally they'll burst out into full bloom some night in the next week or so. In the morning, the spent flower droops on the vine like a used condom. These photos aren't the best, but they'll have to do for now. Sunset beckons and I'm off to the beach! 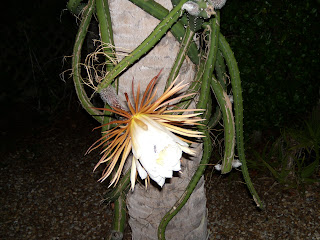 June already! How quickly the months fly by. On the other hand, it seems ages ago that we celebrated my birthday at the drum circle on Siesta Beach (May 10) and that we held book signings in bookstores on Miami Beach and in St. Louis (mid-May). That week, too, I was the Sunday Celebration Speaker at the Center for Spiritual Living in St. Louis - you can listen to the talk right here. Prior to this talk, I had given one at the earlier service that morning. They were intended to be pretty much the same, but this second one turned out quite different from the first. That's quite an art, learning to deliver two similar talks back-to-back. I now have great respect for those who do it regularly!

Just this past weekend, we led a One-Day Intimacy Retreat in Orlando. Different from our weekend workshops, but really a valuable day for the participants. So much packed into one day! There were happy tears during the day and lots of smiles when they left - hurrying home to put into practice what they had learned. Funny how some of the best memories of Intimacy Retreats are of the events that take place back in the couples' private rooms...!

This morning I managed to rise in time to attend yoga on the beach which is now at 8 a.m. instead of 9. Well worth it. Richard joined me for Avananda's wonderful class. Afterward we relaxed our bodies into the Gulf of Mexico, which was like a silky lake this morning, with a pod of dolphins in the neighborhood too!

(Maybe some day I'll write about my fabulous meditative experience with dolphins. They are AMAZING beings.)

We returned home and took time to enjoy our daily tantric practice together - Peaceful Passion. What a great beginning for the first day of the month.
on 6/01/2009 No comments: Links to this post