On Becoming a Flute Player

You might think from the "We,Oui" title - and this iconic photo - that I am going to discuss a workshop in Paris. (I'm not, but check out our Intimacy Retreat in ITALY next year!)

No, I chose the title because it expresses how I feel each morning, as Richard and I join together in our daily practice of love. Oui, oui ~ Yes, yes! We - the two of us, joined in love, experiencing such happiness in that moment that we want it to last forever. Like lovers in Paris. We, Oui!

Pragmatic relationship counselors often try to normalize the idea that over time, a relationship loses its romantic feeling, that it's natural for that to happen. Well, yes, lots of things change as we move from our 20's into our 30's, 30's into 40's, etc. Change is inevitable. Look at our bodies! We know that exercise and eating nutritiously are necessary to keep ourselves healthy and trim. If we do nothing to stimulate our bodies into shape, they will indeed slip out of shape.

Similarly if we do nothing to keep our romantic relationship in shape, it, too, will slip out of shape and become a fading memory. However, this so-called "normal" waning of romance is reversible if we attend to activities and attitudes that can keep it in shape.

Like our bodies, a vibrant and rewarding sense of connection with a partner can keep its shape with proper attention. Touch, for example, encourages a necessary hormonal response for bonding.

Try this: Ask your partner to join you, for the next 7 days, for at least ten minutes a day, in some romantic touching activity. Not sure what to do? Try massaging, hugging, "Peaceful Passion" or any other way of sharing a loving connection through your body, your skin, your hands, your hearts. Be sexy, sexual and/or sensual. TEN MINUTES? That's less time than you spend trying to end a phone call with someone you don't even want to be talking to!Surely your relationship is worth the time?

Be sure to let me know how this daily practice of love affects the shape of your relationship!

Need more ideas? Check out our book: Tantric Sex for Busy Couples and/or use our Lessons in Intimacy CD.

For upcoming dates & locations of Intimacy Retreats, visit www.IntimacyRetreats.com/schedule.htm
on 8/09/2012 No comments:

Here is the most recent newsletter sent from my website, www.IntimacyRetreats.com:
"Nailing it - that Just Right Feeling"

INTIMACY IN THE 21ST CENTURY: THE LONGING FOR AND LEARNING OF CONNECTION

Human beings are designed for connection, and intimacy is part—perhaps the most meaningful part—of our human potential. Still, it is often an experience that goes unrecognized, unnamed, and unacknowledged. It can be both longed for and feared. Are some people more “wired” for intimacy than others? Is it a basic biological need? Can it be measured, and how much is required? Is it a cultural preference? Is it our birthright? Is it something that just “happens” or can it be intentionally learned and created? In this course, we will investigate the many levels, definition, and descriptions of intimacy, including sexual, social, and spiritual, and explore what has happened to traditional intimacy in today’s world of Facebook “friends” and other social media.


This is a six-session program in Sarasota, FL. The first class was held, at the University of South Florida, on Wednesday, June 6. Those in attendance shared various questions they had about intimacy. As a group, we started a list to define "what INTIMACY is."  Unfortunately, the software I used during the class to display and record the questions and descriptions cannot be imported here. (Or at least, I haven't yet found a way, but I'm working on it!)


If you are in the class, feel free to leave a comment or question. See you next week!

So excited that our Intimacy Retreats are featured as "Marriage SOS" in the May issue of First for Women magazine! 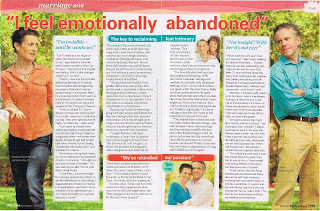 Thanks for stopping by to visit.

The first lines of this poem came to me last night as I lay spooned against my husband Richard's back.. Wanting to remember them, I sat up to write them down - and the whole poem flowed forth!
Naked skin pressed against each other
sweaty on this cool night
my love pouring into his sleeping back
his sleeping love seeping into my open heart
Unwakened yet aware of my breasts against his back
Nothing, nowhere else can match this warmth
This joyful dream that joins us
This naked stillness dancing between us
Skin to skin exchange
Sharing one moment then another
Heart bursting with love
He stirs awake
No need to fulfill
Only this moment
Naked skin